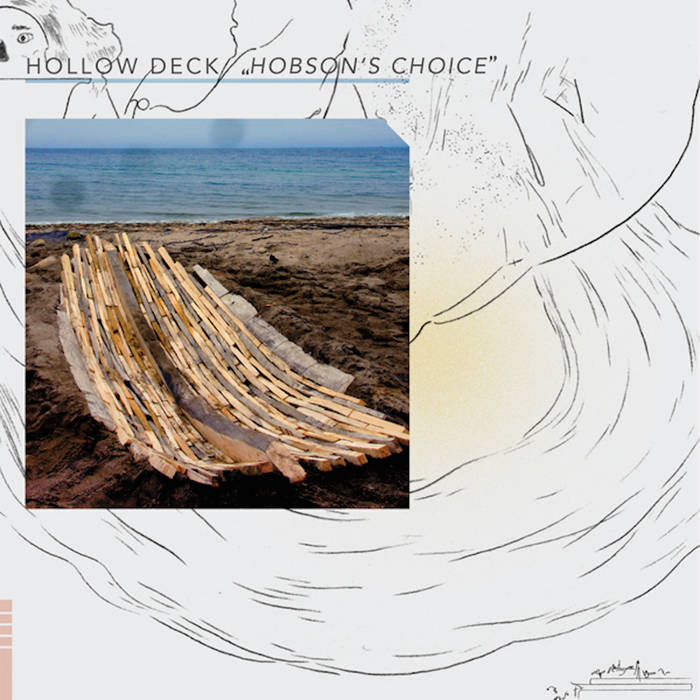 The debut LP by this Western Mass duo is a masterpiece of fractured air. The two performers are Andy Allen (from the original line-up of Guerilla Toss, among many other places) and Mia Friedman (whose collaborations apart from this include Lichen and appearances with Lauri McNamara’s Carbuncles).

Previously issued as a cassette, Hobson’s Choice, is a blend of traditional and experimental approaches that alternately puts us in mind of several units inhabiting the landscape of Strange Maine over the last decade, and the animated ’30s cartoons of Max Fleischer. And Hollow Deck have a unique way of quivering between their two main style poles guaranteed to put hair on anyone’s chest.

From its first song, the album is a bridge between beauty (as personified by Mia’s singing voice) and odd instrumental work that moves from clutter to clack to clam in the space of a blink. A few of the tracks are so sweetly arranged — rural voice and flute gliding above warm fields — that it almost feels like insanity is on the wind when the musical proceedings turn dark and unruly. But, as in life, they always do eventually, if only for the nonce. Before you know it, the scene turns into a nursery room theatrical with mice in white gloves capering while the cat naps. Other gorgeous bits recall Joanne Robertson at her most elegiac, singing along to a broken record. Then flutes join the fun, as though representing a pack of wolves mourning the death of the moon.

Hobson’s Choice is filled with many other such seemingly contradictory juxtapositions. Letting them flow through your head will free you — if only for a moment — from the world around us, delivering you somewhere new before snatching you back to reality.