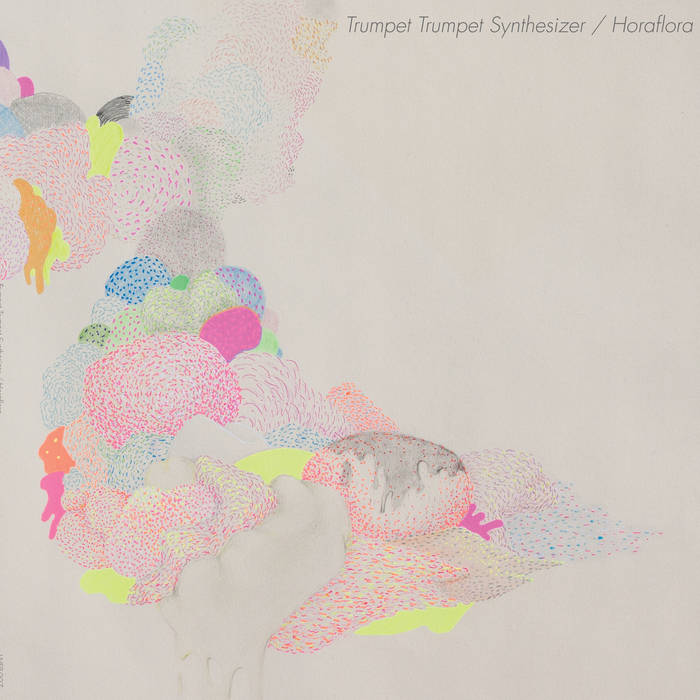 
A: TTS - ‘Oh Baby’
Trumpet Trumpet Synthesizer (feat. members of Cloud Becomes Your Hand, HAG, VaVatican), are based out of Brooklyn and bring some odd strategies to bear upon the often-stuffy tropes of improvised music - turns out, vocoder/synth and trumpet can get downright sexy if you let em drift just right!

This sidelong piece, recorded between 2012 and 2013, marries the grit, spit, and oomph of Brad Henkels amplified trumpet and the hushed, baby-soft sighs of Erica Eso’s (Weston Minissali) vocoder/vocal/synth in a way that seems tailor made for quietly undermining any expectations.

‘Oh Baby’ goes through several sections that hang together tenderly throughout, though changing tone quite a bit before the piece’s completion - a nearly neo-soul beginning with warm subharmonic bass notes float right through extended trumpet work that simultaneously functions as off kilter beatwork as it does a tonal aspect of the overall sound. Later, an array of high pitches tangle into a knotty blast that stops just short of uncomfortable, dropping into a subdued section of sighs, whispers and distended tones that flicker out like the last candle in the latest evening.

B: HF - ‘My Acoustica’
Horaflora (Raub Roy, of Life Changing Ministries, Oakland), contributes another sidelong piece loosely based on, certainly indebted to, and specifically referenced to, Mauricio Kagel’s ‘Acoustica’ album and work in as that a variety of electroacoustic devices were invented and paired with backing pieces realized on a choir of small cassette players played back in a variety of spaces. This specific comparison may have been made at any point in Roy’s career thus far, but his stated intention to move away from exploring acoustic treatments in the future, provides an oppurtunity to make clear connections by way of this tribute.

‘My Acoustica’ starts, perversely enough, with an introductory section seemingly unrelated to the proffered concept, a down pitched laugh of unknown origin pitted against low, creeping, creaking and maybe some flute…? The piece begins in earnest a minute or so down the line, glissiando’ing tones from the ‘cassette choir’, a balloon-driven, bassoon-esque resonant horn tone interjecting with prepared speaker sizzling and sharply convulsing until everything comes to a sudden stop, and a woozy, wobbly, record player spins up and initiates another round of aleatoric interactions that push through some classic synth treatments (from the tape players again) and out the wormhole that ends the piece.

Weird Ear Records is extremely pleased to release this split album, our first split release, as well as our initial foray into a new packaging design for our cassette line that dispenses with the plastic case in favor of a custom, handmade, card stock tape sleeve/jacket that will be made to suit for all cassettes going forward.

The design and music both are complimented beautifully by the cotton-candy-like art of Brian Henkel, which is sure to look magnificent on the LP jackets as well, further complimented by matching pink tapes and vinyl.