On The Pedestrian Side 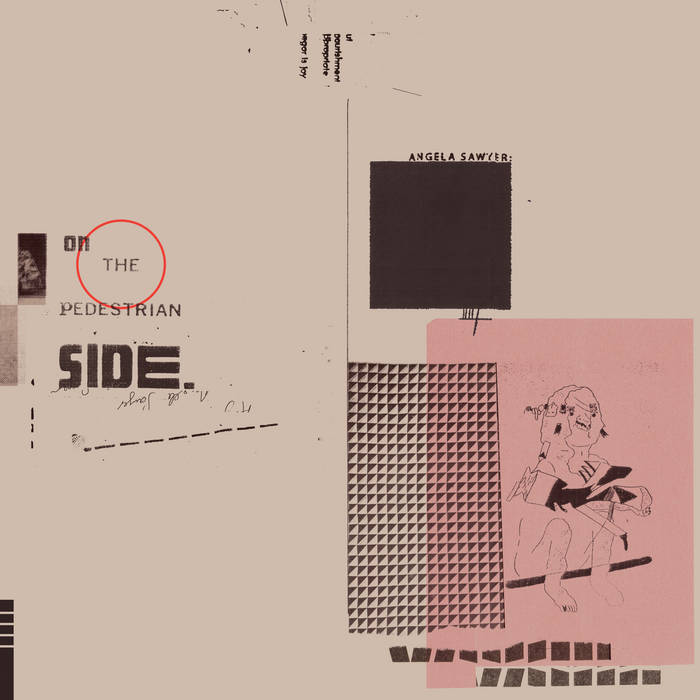 Sam Tweaks Eclectic, etherial and essential - there is just something about the way Angela sings songs that exudes an almost heavenly tone Favorite track: Will There Be Yodeling in Heaven.

Liner Notes by Angela Sawyer:
They say that people who make avant garde music do it because they couldn't hack it making the regular stuff. In my case that is entirely true. Although I have a halfway decent sense of pitch, my timing has always been clunky as shit. I've been a musician for almost 20 years, and over that time I've improved very slightly, but I'll always be able to hear far finer rhythms than I can perform, and there will always be some degrees of rhythmic subtlety that I cannot hear at all.

Luckily, making stuff is usually just a matter of finding the overlap between things you like and things you can probably manage to pull off. So when I think about pop architecture, I think about the creepy frigidity of the Paris Sisters. And quaaludes, and going a week without having a conversation with anyone, and waltzes, and handheld recorders, and making soup out of melted crayons.

Some of these songs were written by me and some were not.

'Will There Be Yodeling in Heaven' was written in the mid-90s off a Bob Wills title, which I had only heard of (at that time) but hadn't heard. I stole a lyric from the Louvin Brothers about a dead person having their face underneath the grass. All of the live songs here were performed at the 3rd annual festival called Weirdstock, put on by the Whitehaus Family Record here in Boston in August of 2011, and recorded on a phone. The Whitehaus has done an awful lot over the last several years to make Boston a better place to play & enjoy music. I'm glad I live in the same place as them.

'Yaadon Ki Baaraat' is the title cut from a well known Bollywood musical from 1973. It was written by RD Burman. I think the acoustic bass sample comes from Bruno Nicolai, but I forget exactly where, and the drums include a recording of a flipped bottlecap.

'Is It Really Me' is written over the top of a bossa nova melody- the fastest one I know of, Roberto Menescal's 'Little Boat'. Roberto thinks that all songs are about the ocean, but he's mistaken in this case.

'Cold Enough To Love' was written by a Boston pop band called One Happy Island. It's on their record 'A Purpose of the Surface', released by Odd Box Records. Their version is super Beach Boys-y, and great. I played it on a 1984 Korg PSS-50 Super Section. There's a bass note that I got from a passing bus. One of my first jobs was at a restaurant that had huge walk in freezers, and I always really liked the sound inside.

Stu Phillips is one of those secret music masters without whom America would be a much worse place. The founder of Colpix records, he scored hits for Shelly Fabares, invented Capitol's easy listening schmufs the Hollywood Strings, and wrote scores for lots of biker soundtracks, as well as 'Beyond the Valley of the Dolls', 'The Six Million Dollar Man', 'Battlestar Galactica', 'The Amazing Spider Man', 'The Fall Guy', and even... wait for it... 'Knight Rider'. He also wrote Tammy Wynette's best ever song (I checked, of course), 'Run Angel Run'. You get two versions, because this project was originally supposed to just be re-recordings of songs from the abovementioned Weirdstock show. I took too long, so that idea got derailed.

I saw a folk band at the Whitehaus one night (maybe it was Chris North?) that had a very sweet love song about looking into a girl's eye and seeing a whole world behind it. I got really excited about how analagous this concept was to Edmund Husserl's idea of 'intersubjectivity'- basically that it's your relationship to other people that founds and even creates your relationship to yourself. A terrifying idea if I ever heard one. Ultimately, the lyrics turned out a little overcooked, but I did get to use Doug Demay's huge midi library to work on it.

The next song was written shortly after I watched the Season 3 finale of the tv show 'Louie'. 'Millicent Bell' is a feminist literary critic known for arguing that the character Catherine in Ernest Hemmingway's book 'A Farewell to Arms' is a blow-up doll, or not enough of a person. Critics of Bell have made the useful counterpoint that if you can't empathize with anyone at all, it's probably also true that you can't empathize with women. While Bell's critics are right, they're also huge dicks.

'I Wonder As I Wander' was written by John Jacob Niles in 1933. This recording was also given away as the store Christmas card for Weirdo in either 2011 or 2012. Can never remember which year was which, but the the other one was a fake Huangmei opera.

'Palestine' was written by Boston songwriter Milo Jones. I had to switch part of the chorus into a different octave to get it to be easy enough to render on a ukulele, and that really threw a wrench in it, but the song is so well put together that it survived pretty nicely anyhow. I played Milo this recording and he assured me that the lyrics are not really about getting a blow job in the Middle East.

'The Knife I Carry' is what happened when I tried deliberately crossing Charlie Gocher's thoughts about killers and their cutlery with the theme from 'The Love Boat'. It has also been recorded by Exusamwa, with a rather different arrangement.

Currently I reside in a really small space, so there isn't much room for instruments. Some of the ones you hear here are samples, some are midi, and the rest are mostly not instruments at all but things like vitamin bottles or sleeping bags. I definitely believe in using what's handy. I got a ridiculous amount of help from Doug Demay (Fat Day, Exusamwa) all along the way. Just about everything that works well here is his fault, and anything you find remiss is probably me. Finally, because of the back-burner, piecemeal way it had to be made, this was easily the longest, slowest project I've ever taken on in my entire life, lasting over 5 years from start to finish. Raub was endlessly, endlessly patient about it. Thanks for listening.
------------------------------------------------------------------------

While Sawyer’s pitchy voice sounds like Joanna Newsom after huffing a couple helium tanks, the track itself is actually quite catchy—what happens when a mad genius covers a classic Bollywood theme with flipped bottle caps and a scuffed Bruno Nicolai sample."
daily.bandcamp.com/2017/01/20/angela-sawyer-on-the-pedestrian-side-review/

ANGELA SAWYER - After finishing a philosophy degree specialising in Husserlian phenomenology in the mid-1990s, writer and musician Angela Sawyer felt fully prepared to start astonishing audiences around the Boston area using her mouth, some broken electronics, toys & noisemakers. Impromptu squealing & gargling has become her specialty, and she’s released a steady trickle of small-run lps, cds, cdrs & cassettes over the years. She changes the names of her projects to suit her every whim, but longer running ones include Preggy Peggy & the Lazy Babymakers and Duck That. A recent lp release “A Short Visit To The City That Bleeds” is full of weird up-close intimate wordage and environmental activity recorded in and around a rental car parked in Baltimore, MD. Dennis Tyfus from the Ultra Eczema label says Sawyer is “the best living vocal artist”. You can also catch Angela doing stand up comedy around town, & she has been selling vinyl records in the Boston area for 25-odd years.
iluvkarlrahner.com